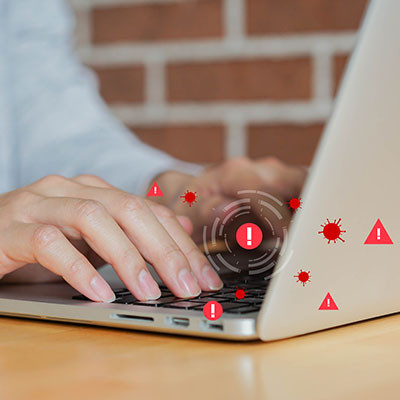 Cybersecurity needs to be taken seriously. Cyberthreats can cause serious damage to an organization in the form of lost revenue, lost data, damage to your public image, lawsuits, and more. It helps to understand what you are up against, so let’s define some of the most common types of threats that you need to be aware of.

Computer viruses and malware are usually the most well-known cybersecurity threat. Technically a virus is a type of malware, whereas malware is the overall category of a wide range of threats. Malware is defined as malicious software (hence the name “malware”). Malware is typically a small program that can slip its way onto a computer or mobile device without the user detecting it. Sometimes they spread across multiple devices on a network or infect specific programs.

Malware is often used to steal personal information, hijack and use your email or other communication tools, or deliver even more dangerous payloads. Fortunately, preventing most viruses and malware is pretty simple, provided that you have a centrally-managed antivirus that watches over every endpoint on your network.

Ransomware is a specific type of malware that really hits you where it hurts—your wallet. When ransomware is deployed on a PC, it quickly spreads across every file it can and encrypts them, basically making those files unusable. Then, it tells the user that it will delete everything within a certain amount of time unless the user pays a sizable ransom to get it all back.

Ransomware has been one of the most prevalent threats over the past few years, as many types of organizations have been targeted successfully, including hospitals, municipalities, schools, police stations, and businesses of all sizes. It’s an extremely successful and lucrative playbook for cybercriminals.

Rootkits are specially designed software that gives someone else full control over your device, and we really mean full control. Some rootkits can basically give a hacker access to your smartphone’s camera and microphone without you even noticing.

Scarier yet, often rootkits are designed with extremely specific goals in mind, and might target very specific types of systems. The most famous rootkit is Stuxnet, a small piece of software that was so widespread, it was found on computers aboard the International Space Station, but it was specifically designed to give false readings for specific ventilation systems used in specific Iranian power plants in an attempt to cause damage to the plant.

One of the most common methods criminals use to steal information and infiltrate networks, phishing attacks are extremely dangerous. Why? Because they clearly work.

In an age where most businesses are getting better about having antivirus and antimalware solutions, cybercriminals have been relying more on tricking end-users into letting them in.

Phishing emails come in a huge range of varieties, ranging from emails that look like they are from the CEO asking for credentials, to emails that look like they are coming from a bank telling you to reset your password. Plus, phishing attacks aren’t exclusive to email, as they have been seen in text messages, phone calls, and generally every other form of communication.

The best defense against phishing attacks is training every single person in your company to understand and identify them. Fortunately, we can help with our phishing simulation service, and we’re happy to get your business on a trial.

Social engineering attacks are sort of like phishing attacks, except they usually happen outside of email. They can happen on social media sites like Facebook or LinkedIn, or on instant messaging applications, or even in the comments of blog posts and forums. Sometimes, these attacks even end up happening over the phone!

It’s pretty simple; the cybercriminal will use information they know about you to try to gain trust to trick you into doing something. Often this will lead to other types of cybersecurity attacks, or simply allow the criminal to make off with credentials, stolen data, or money.

The concept of a SQL injection might not be common knowledge, but you’ve more than likely heard of businesses that were victims of one. SQL injections were the cause of some of the world’s highest-profile cyberattacks, like the one that hit Target stores in 2013 and stole 40 million credit cards, or the 2017 Equifax data breach that resulted in the theft of the personal information of over 147 million Americans. These types of attacks are dangerous, because of how quickly a massive amount of information can be stolen. That can do a huge amount of damage to a company’s reputation and bring on lawsuits that only the largest organizations could withstand.

DNS tunneling is a little harder to explain to non-technical users. It’s hard to detect, and can often trick advanced firewalls and other traditional cybersecurity protections into letting a cybercriminal push an infected payload into your network.

The only surefire way to protect your business from a DNS tunneling attack is to have your network traffic carefully monitored and analyzed to detect malicious attacks before they have a chance to cause havoc on your network.

When an online service goes down unexpectedly, you can usually count on a DDoS attack being the reason. DDoS attacks work by hijacking hundreds, thousands, or even millions of infected devices across the internet and making them attempt to ping another device all at once. This swarm of devices is called a botnet, and virtually any internet-connected device could be caught in one.

This means DDoS attacks are very difficult to block and mitigate, as the attack comes from so many different directions. DDoS attacks often target websites, but they can hit public and private servers and networks too.

It is important to keep your software updated, and a zero-day exploit is one of the main reasons why. Often, when a software developer discovers a vulnerability, they find it before hackers are able to take advantage of it. However, if a cybercriminal happens to discover the vulnerability first and takes advantage of it, your system is practically defenseless against it.

That’s why it’s so critical to keep your software updated, as zero-day exploits can lead to other threats, like malware delivery, data breaches, and SQL injections.

Shadow IT is any technology—hardware or software—that is on a company’s network without the knowledge or approval of the company’s IT department. Its name makes it sound especially malevolent, and while it sometimes can originate from a person’s bad intentions, it’s usually a user trying to accomplish a task their own way, instead of the right way.

Here’s a perfect example: let’s say Tom wants to share a proposal and a bunch of sales materials with a client, but they are too big to fit in an email attachment. Tom might pull up his personal Dropbox account and drag the files there and pass them to the client.

That means some of your data (which might be sensitive in nature), is now being stored with a third party that you simply don’t have control over. Shadow IT could be unexpected software, hardware, or the use of your hardware and software in ways that weren’t intended.

The biggest way to prevent shadow IT is through thoroughly implemented network policies and ensuring that your people have the tools they need to do their jobs properly.

The security of your business and its data is crucial. If you need assistance with meeting compliance standards or want help protecting your business from these threats, give us a call at (410) 531-6727 today.

Utilizing More of Your Data Can Help Build a Bette...
Securing Every Endpoint is Important to Maintainin...

More posts from author
Monday, 06 February 2023 We Need to Talk About How Modern AI Tools Can Influence Work
Friday, 03 February 2023 Tech Giants are Looking to Ditch the Password
Wednesday, 01 February 2023 Can Technology Help You Overcome Your Direct Pain Points?
Comment for this post has been locked by admin. 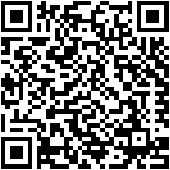