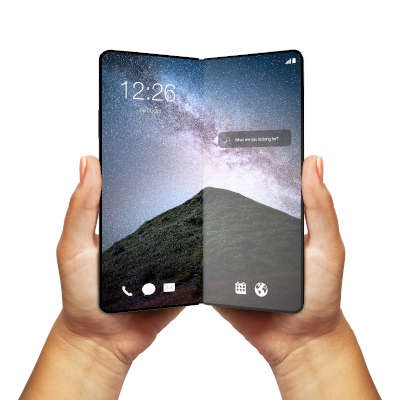 Last week, we explored the flagship smartphone market. This week we thought we would explore some innovative new devices. There have been some advances in some of the technology used by smartphone manufacturers to create cool new features. Today, we take a look at some of these devices.

Samsung’s major contribution into the folding smartphone market is the extraordinarily expensive Galaxy Z Fold2. While the device is impressive with its two full displays and three camera sets, there are some questions about who this device is for.

Basically the biggest benefit is that the phone opens up to a 7.6-inch tablet. That benefit is substantial, of course, but without dedicated apps for that aspect ratio, it may only be valuable for people who want the best folding smartphone on the market, which this currently is.

When folded it has a 6.23-inch Super AMOLED screen that functions much like your standard mid-range smartphone would, but when you unfold the Fold2, you get a 7.6-inch Dynamic AMOLED display. The rest of the phone is as you would expect. It features a five-lens camera platform, a 4,500 mAh battery with fast charging, and an in-display fingerprint scanner for security. The Z Fold2 is available in Mystic Bronze, Mystic Black, and a Thom Browne Edition Grey from most major carriers.

Two devices that are of similar form factor are the Samsung Z Flip and the Motorola RAZR 5G. Like the flip phones of old, each of these devices fit in the palm of your hand and fold virtually in half. The difference, of course, is that today’s version of the flip phone flips into a massively powerful smartphone.

The Samsung Z Flip doesn’t feature a large external display like the RAZR (which we’ll talk about in a minute). It’s 1.1-inch numeric display doesn’t really have a lot of function, but when it’s open, it becomes a 6.7-inch smartphone. Like the other premium devices, it runs on Android 10 on a powerful Qualcomm Snapdragon 865+ processor, with 8 GB of RAM. The Z Flip provides a high-end smartphone experience in a device that folds in half, it’s that simple.

The Motorola RAZR 5G looks like the iconic Moto RAZR did in the era before smartphones were king. For all of the RAZR’s nostalgia it seems to spec-out significantly lighter than the Z Flip. It features a 6.2-inch P-OLED screen that folds up and a smaller display on the outside of the folded phone. It runs Android 10 on a Qualcomm Snapdragon 765G chip and comes with 8 GB of RAM with 256 GB of onboard storage space.

Let’s take a look at the complete specs of these devices:

The last device we will look at today is the LG Wing. The Wing is interesting because out of the box it looks like your typical smartphone. When you get it into your hand however, you soon see what the big hub-a-loo is. With a flick of your thumb, you can turn the device's 6.9-inch screen horizontally to expose a second smaller 3.9-inch screen. You can use both screens independently or simultaneously within the same app that supports the content distribution.

The Wing’s hardware isn’t quite flagship quality, but it is pretty good. The quirky device runs on  Qualcomm Snapdragon 765G and comes with 8 GB of RAM. It is built from solid aluminum and Gorilla Glass 5. With it’s 4,000 mAh battery most solid users will get about a day out of it if they are consistently using the dual displays (why wouldn’t you if you had this phone?) The tri-camera setup includes a 64-megapixel wide angle lens and dual ultrawide angle lenses of different speeds.

The LG Wing is available in Aurora Gray and Illusion Sky and should be available on most carriers by the middle of November 2020.

Do you think these devices are cool? Would you consider forking over $1,000 for one this year? Leave your thoughts in the comments section below.

Facebook Twitter LinkedIn
Tags:
Technology Smartphones Save Money
How SMBs Use Social Media
You Need to Keep a Close Eye on Your IT Investment...

More posts from author
Saturday, November 28, 2020 Automation Has Workers Looking Over Their Shoulders
Thursday, November 26, 2020 Go Beyond a Firewall to Secure Your Business
Tuesday, November 24, 2020 Benefits of a Comprehensive Backup Strategy

The End is Nigh for Adobe Flash Player
Once the cornerstone of many websites on the Internet, Adobe Flash Player is finally going into retirement. As soon as December 31, 2020 rolls around, support for the software will end. This means that it needs to be removed from your busin...
Read More